According to CNN, Italian authorities have launched an investigation after the bodies of 26 teenage girls were recovered from the Mediterranean Sea this Sunday (November 5th).

All of the girls found were between the ages 14-18, are reported to have been migrants from Niger and Nigeria, who were embarking on a dangersome journey to Europe. Their bodies were discovered close to rubber dinghy with the survivors hanging onto the remains some of the dead, in a bid to stay afloat and alive. A chilling scene.

This rescue was one of four separate rescue missions executed over the weekend. Of the 400 people rescued and brought abroad Spanish vessel, Cantabria, 90 women and 52 minors, including a week-old-baby were saved.

Salerno’s Head of Police, Lorena Ciccotti, told CNN that autopsies would be carried out on Tuesday and that coroners would be investigating whether the girls had been tortured or sexually abused.

Libya is notorious for human traffickers, and this particular port in Salerno and the route to Europe is well-known to authorities, who are struggling to keep up with the spiraling numbers of smugglers.

Since the beginning of 2017, 2,839 migrants have lost their lives on the central Mediterranean route. Statistics from the International Organization for Migration also reveal that 150,982 migrants have reached European shores, and of those migrants, a whopping 74% are Italian arrivals, more than Greece, Cyprus and Spain combined. 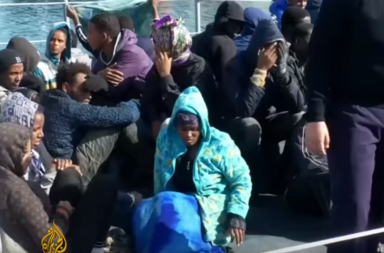 The World Reacts To Migrant Slave Trade In Libya #EndLibyanSlavery