I think we can call April a banner month for Beyoncé. She has broken the Internet three times, and the month isn’t even over. First, the news broke of her partnership with Adidas for athleisure brand Ivy Park. A rebrand that includes footwear is on its way in what she calls the “partnership of a lifetime”, now that her deal with TopShop has been severed. We cannot wait to see the lewks served as Bey becomes a “creative partner” with Adidas.

On April 17, her documentary film about her history-making Coachella headlining performances dropped on Netflix. Then: it’s reported by Variety that Homecoming: A Film By Beyoncé is but one of three projects coming from the decorated singer-songwriter turned filmmaker. The Netflix deal’s price tag, while not confirmed by Parkwood or Netflix, is being speculated to be valued at $60 million. Her last film, Lemonade, won a Peabody Award in 2017. 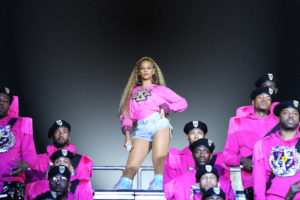 “Homecoming: A Film By Beyoncé” is one of three specials under her Netflix deal.

If all of this ain’t enough jelly for ya babe…she dropped surprise album entitled Homecoming: The Live Album as a companion to her latest doc, so you can relive the concert via stream and on the go. It should hold you over until her voice appears as Nala in the live action reboot of Disney’s The Lion King, slated for release this summer.

King Bey’s crown is secure, right along with all these bags. Salute!

Carrots and Beats: The Leading Ladies of Afrobeats

FKA Twigs on Why She Went Public With Shia LaBeouf...