I’m sure by now you’ve seen the images from the recent controversial Dove commercial circulating the various nooks and crannies of the internet. The ad has caused quite a stir since it leaked on Facebook, with people expressing their anger and disappointment with Dove for the racist commercial. And now the Black woman in the ad is speaking out about her experience.

#PressPlay : Earlier today there was outrage about the #DoveAd that was posted on their page. We first reported on it when #Dove issued an apology for being racially insensitive. By that time, the #Ad had been deleted and was hard to find, leaving many to speculate based on an image that was circulating. The roommates wanted more info and wanted to see the actual video which was not available earlier. The video has since resurfaced. After seeing the video, what are your thoughts roomies?

Lola Ogunyemi, the Nigerian woman featured in the ad, has stepped forward with a thoughtful essay on the Guardian and she wants you to know that she’s not a “silent victim”. In the piece, Ogunyemi describes her elation when she got the opportunity, and how felt when things took a turn for the worst on social media.

Ogunyemi is no stranger to “society’s opinion” about Black women. She recalls her experiences growing up as a dark-skinned girl, and how often she heard the phrase “ you’re so pretty.. for a dark-skinned girl”. So when she had the chance to represent her “dark-skinned sisters” in an internationally recognized beauty brand, she jumped at the opportunity.

But she did not expect to wake up to the backlash she did on social media.

“If you Google “racist ad” right now, a picture of my face is the first result. I had been excited to be a part of the commercial and promote the strength and beauty of my race, so for it to be met with widespread outrage was upsetting.” she writes.

Ogunyemi says that her experience on the set of the commercial was nothing but positive, and that the fact that she was shown as a “before” to a “before and after shot” came as a surprise.

“If I had even the slightest inclination that I would be portrayed as inferior, or as the “before” in a before and after shot, I would have been the first to say an emphatic “no”. I would have (un)happily walked right off set and out of the door. That is something that goes against everything I stand for.” she writes.

After taking a look at snapshots of the ad, which has since been pulled from the internet, the Nigerian model states in her essay that she completely understands the reason people are boycotting the brand.

“There is definitely something to be said here about how advertisers need to look beyond the surface and consider the impact their images may have, specifically when it comes to marginalized groups of women,” she states.“It is important to examine whether your content shows that your consumer’s voice is not only heard, but also valued.”

Ogunyemi’s clear and heartfelt articulation of the reasons she chose to shoot the commercial, and how she’s responding to all of the backlash goes to show that she is not “a silent victim” and we love her for it! 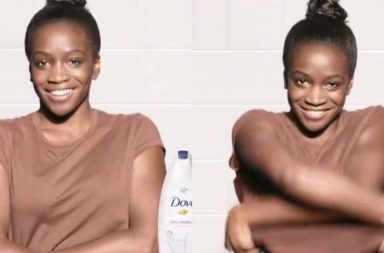