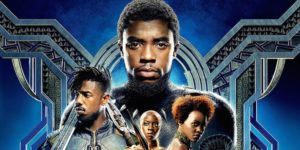 Black Panther became known as box office king, scored the first-ever Best Picture nomination for a superhero film, marking another landmark for the action-adventure drama about a high-tech African nation and the warrior-king who is sworn to protect it. It became an international box office hit as well breaking barriers and introduced a culture to some that may not have known.

A few eyebrows were raised on why director, Ryan Coogler and  actress, Angela Bassett haven’t been nominated. Are we shocked anymore that box oscar hits aren’t nominating people such as these? With several movies underneathe both of their belts, you would think they would receive such  prestigous for their craft. Regardless of the flaws and philosophies behind award shows, an Oscars win does mean something for a person’s career. First, it means studio marketers can put “Oscar-winner” in front of their name on all future movie posters. It also means they’ve been formally recognized for their talent.

Although these  individuals did not receive nominations, the Best Picture recognition is a testament to the strength of this whole filmmaking royal family.

Marvel Studios president Kevin Feige, said  “Our [first] assistant director, our director of photography, our production designer, and costume designer are all women, most women of color. This was not because we set out saying, ‘We need to do this.’ We wanted the best people, and this is what happened.”

The Biggest Stars of Hollywood Come Out to Celebrate Oprah’s...

Keke Palmer Celebrates Soon-To-Be-Born Son in ‘Once Upon a Baby’-themed...

Pregnant Mother of One Found Dead with Upper Body Trauma near Tampa http://dlvr.it/ShxGvb

Tiffany Haddish Not ‘Concerned’ About What People Think Despite Outcry to Have Her Removed from ‘Girls Trip 2’ http://dlvr.it/Shtr69