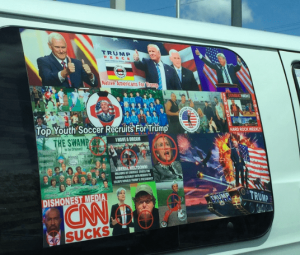 Democratic Representative Maxine Waters was named one of the many intended recipients of a suspicious packaged that carried a  handmade pipe bomb–but twice over, having two packages intended for her intercepted. Now seen as a connected string of packages, these packages were sent to government officials and Democrat or liberal leaders that not coincidentally had also been singled out and targeted verbally by Donald Trump at tweets and rallies. The mail bomb recipients include Barack Obama, Hilary Clinton, Joe Biden, Robert DeNiro, and Sen. Kamala Harris (D-CA). Waters also received death threats back in July of this year, after she spoke out against the double standard of so-called civility the GOP insisted on after Trump called her a “low IQ individual”.

The rumor that liberals planted the mail bombs to vilify Republicans was quickly squashed upon the arrest of Cesar Sayoc, a Florida resident and Trump supporter with priors for making bomb threats–and a long social media trail of spewing hate and targeting members of the media. Sayoc is facing up to 58 years in prison for his alleged crimes.

Who is Lucy McBath?

Ohio Woman Who Went Missing Found Dead in Backyard with...

Summer Walker Responds to Backlash After Saying She Prefers ‘White’...

Caught in the Act: Black Panther Star Letitia Wright and...

Lyft Rider Details Why She Jumped Out of Moving Vehicle...

CNN Journalist Announces She’s Moving to NY to Deliver Baby Due to Horrific Statistics About Black Women During Childbirth http://dlvr.it/SdxsqH

Summer Walker Responds to Backlash After Saying She Prefers ‘White’ or ‘Gay’ http://dlvr.it/Sf0wPL