Who is Lucy McBath?

You may ask who is Lucy McBath.

She’s a mother. A fighter. An activist. A Democrat.

She is the mother of the 2012 murder of her son, Jordan Davis. A  black teenager who was shot and killed by a white man at a gas station when the 17-year-old refused to lower the volume of the rap music playing in his car.

Once a Delta flight attendant, but now a Democratic Congresswoman candidate for the 6th district of Georgia. Her calling of politics happened after the death of her son Jordan.

Currently,  she is asking voters in Georgia’s 6th Congressional District to give her the chance to represent them by unseating the incumbent, Republican U.S. Rep. Karen Handel. If that happens, McBath would accomplish what Jon Ossoff could not during last year’s special election: “flip the 6th” from red to blue.

McBath, the Democratic nominee in a Republican-leaning race, is redefining social justice in politics this year. This has a lot to do with her deep personal connection to the Black Lives Matter movement. Yet she is also far from the only candidate this election cycle to explicitly discuss issues of racial injustice and violence against minorities. 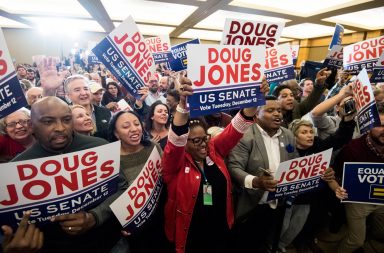 Thanks to #BlackWomen, Doug Jones is Now The New Senator of Alabama! #BlackGirlMagic