In the letter, Harris condemns Trump’s ineffectual leadership and says that instead of working to resolve the issues presented by the global pandemic, he is trying to teach Americans to learn to live with it.

“People are out of work, hungry, suffering and dying. The United States has more than 4.2 million confirmed cases of COVID-19 and nearly 147,000 people have been killed. The situation is dire and is getting worse, but it didn’t have to be this way. The truth is, one man is responsible — President Donald Trump,” she writes for USA Today.

For months, Trump has been downplaying the seriousness of the novel coronavirus, despite thousands of Americans dying every week. Trump dismissed the benefits of wearing masks and social distancing, but last week reversed his stance, claiming that Americans were “patriotic” by wearing face coverings in public.

Trump is now putting pressure on school districts to force them to reopen, even as the numbers continue to rise across the country.

“The administration’s mismanagement of these crises has worsened longstanding disparities in our country. Black and Latinx people are getting sick and dying at alarming and disproportionate rates, in part due to systemic barriers to quality health care,” Harris writes.

“People are being asked to stay at home to avoid being exposed to COVID-19, but they are in danger of a foreclosure or eviction if they can’t work. People are being asked to frequently wash their hands to fend off the virus, but countless families struggle to pay their water bill. And children are expected to continue their schooling and complete assignments online, but some don’t have a laptop or access to broadband.”

Harris knows that all is not lost — but she says that Trump is not the man for the job.

The evidence would suggest that she is right.

From the beginning, Trump’s message has been conflicting — It primarily focused on resuscitating a moribund economy rather than the citizens he took an oath to protect and preserve.

“Solutions are out there; we just need competent leaders who know how to listen, lead with empathy and get things done. People across the country are begging the president and his Republican boosters in Congress to approach these crises with the seriousness they deserve, recognize their missteps and work on behalf of the people who sent them to Washington. If they can’t, it’s time for them to move aside and let real leaders lead.” 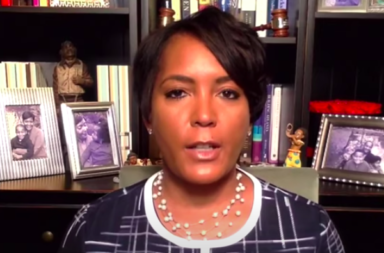