The worlds of poetry, literature and theater were rocked at the news of the passing of the luminous and gifted poet and playwright Ntozake Shange, who passed away October 27 at the age of 70.

Shange wrote the classic choreopoem For Colored Girls Who Have Considered Suicide/When The Rainbow Is Enuf, which was nominated for a Tony Award in 1975. Adapted into two films (the first starring Alfre Woodward and Lynn Whitfield; the second starring Janet Jackson and Tessa Thompson, produced by Nzingha Stewart) and performed 750 times on Broadway, the work is a clarion call for hearing and believing survivors of sexual and domestic violence as experienced by Black women. Reaction was marked by heartbreak and reverence across social media, with playwright Lynn Nottage calling her “our warrior poet/dramatist”, and author Joan Morgan posted that Shange “guided Black women through generations, gifting them permission to discover their own fire and fierce.”

A graduate of Barnard College and USC, the names Ntozake Shange means “She who comes with her own things/She who walks like a lion” respectively. She also means the world to the Back women whose crowns she helped them to own, shine and honor. May she rest well. 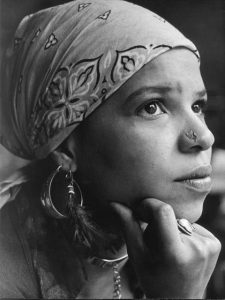 Ntozake Shange amplified the voices of Black women in her work.

Beloved NJ Educator Shot and Killed by Husband in Act...