Veteran comedic and dramatic actor Regina Hall (The Hate U Give, Think Like A Man, and currently in theaters with the latest Shaft film) gave a master class in live event hosting at last night’s BET Awards, held at the Microsoft Theater in Los Angeles. While hosting duties usually go to a male comedian (only Mo’Nique and Leslie Jones have broken the gender host barrier solo; Jada Pinkett Smith shared duties with her husband Will Smith) Regina Hall smashed the ball out of the park with a perfect mix of unapologetic Blackness, Chocolate City homegirl, and politically insightful material, while always leading with humor. While the stellar lineup of performing talent always gets mentioned (and we’ve got that coming in other posts), we’re taking a moment to give Mizz Hall her propers. 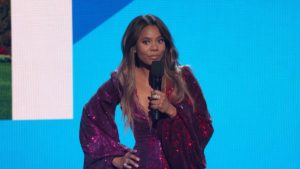 Hall opened the show with a spoof of Homecoming: A Film By Beyoncé that was an homage to pre-gentrification Washington DC, complete with the infamous “Bitch set me up” quote from former Mayor Marion Barry and a prayer circle that only true DC natives understand (catch the show when it re-airs this week to see; we can’t do it justice).

She also waxed poetic about “when we used to live here” as an image of The White House appeared behind her, declaring that “everyone is from DC tonight”. Which left us wondering: Did Billy Ray Cyrus really go to Howard University? From her #DontMuteDC musical number where she did “Da Butt” with friend and fellow actor Taraji P. Henson to her commentary on gentrification destroying her quality time with then boyfriend Jamal, Hall shined a light on critical issues facing Black America without ever losing the spirit of celebration audiences count on from the BET Awards.

Unafraid to show the world that she owed 50 Cent some cash, or that she could tussle with the best of them backstage and not miss a beat, Regina Hall moved the show along and kept it Blackity Black. Kudos to her on hosting her first BET Awards! Shine her crown!

In conclusion, we’d now like for Regina Hall to host everything. All the award shows, at least. Please and thank you.

65-Year-Old Woman Put in Chokehold for Finding $50 in Houston...

Besieged ABC Anchor T.J. Holmes Linked to Another Affair with...