Today is December 1: World AIDS Day. And while the world has made phenomenal strides in battling the stigma of being HIV positive, revolutionized care and treatment of people with HIV and AIDS and come to understand the disease as an opportunity to live and not transmit, rather than the death sentence it used to be in the ’80s…there is much work to do.

The AHF, AIDS Healthcare Foundation, has been committed to this work for decades and now cares for a million people living with HIV in 42 countries. Men, women and children are all living fuller lives because of the work of the AHF, and last night they commemorated the work of dance legends lost to AIDS at their Icons of Dance extravaganza at the Apollo Theater. Living dance icon, choreographer, actor and director Debbie Allen received their Lifetime Achievement Award for her career achievement, her mentorship of dancers throughout her career and her humanitarian work to increase awareness and eliminate stigma around HIV/AIDS. Prima ballerina Misty Copeland conferred her award upon her and bowed before Queen Debbie! 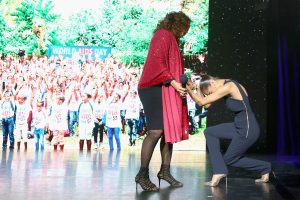 The show was an emotional tribute to the tremendous talent of dance legends Michael Bennett, Ulysses Dove, Michael Peters, and the Boys of Fame–all of whom died of AIDS or related causes far too young. Stellar dance tributes of their works punctuated the night: Jason Samuel Smith reimagined “Beat It” through tap to honor Peters. Robyn Hurder left it all on the stage with her reprisal of her role as Cassie in A Chorus Line in tribute to Bennett. As directed by Resident Choreographer Robert Garland, Dance Theater of Harlem performed two exerpts from ballets by Dove, and the Debbie Allen Dance Academy and Syncopated Ladies paid tribute to Fame in grand fashion. Jennifer Holliday joined AHF caregivers and executives on stage and performed hits from the Bennett-directed Broadway classic Dreamgirls.

The night was a beautiful way to to honor those legendary figures and bring greater awareness to the work of AHF. For more on the event and their initiatives, search #AHFWAD or visit aidshealth.org. 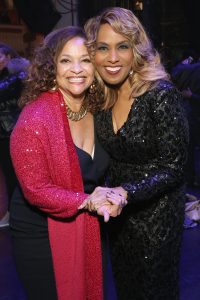 North West Gives TikTok Followers Glimpse into How The Rich...

First Wife of Laurence Fishburne Abused By Actor She Shares...

One of Future’s Eight Baby Mamas Shames Him on Birthday

Fame and Flashdance singer Irene Cara has died at the age of 63. http://dlvr.it/SdQJXL