Last night’s 91st Academy Awards were historic. In one night, a superhero film with a Black cast won three Oscars. The record was shattered for women Oscar winners (15, including Best Animated Short for Bao, Best Live Action Short for Skin and Best Documentary Feature–for Period: End of Sentence, which was literally about the politics of periods and education). People of color dominated the acting categories, with Best Actor, Best Supporting Actor, and Best Supporting Actress going to Rami Malek, Mahershala Ali, and Regina King respectively. For the first time ever, a Black woman executive producer took the stage as her film won Best Picture: salute to Octavia Spencer on the controversial but not entirely unexpected win for Green Book. We’re choosing to focus on that achievement and Ali’s performance instead of some insensitive remarks made on the dais after Julia Roberts announced the winner.

And then: there were Hannah Beachler and Ruth E. Carter, who are the first Black women to win Oscars in Production Design and Costume Design, respectively for two of Black Panther’s three wins. While the emotional speeches from King, Carter and Beachler were all amazing, the moment no one expected was the Spike Lee hug that became a victorious dunk re-enactment on his dear friend and presenter Samuel L. Jackson! After 4 decades of revolutionary filmmaking, Spike Lee finally scored his first competitive Oscar (he won the student Academy Award in 1983) last night for Best Adapted Screenplay with BlacKkKlansman. Lee’s purple Boateng suit (an homage to Academy Award winner Prince) withstood a high jump into Jackson’s arms, followed by a passionate speech that referenced the Year of Return after 400 years since the dawn of American chattel slavery–and called for moral action at the polls in 2020: “DO THE RIGHT THING!!!,” he bellowed. In the presser following the ceremony, Lee reminded the media that “if it weren’t for April Reign and #OscarsSoWhite, and former Academy President Cheryl Boone Isaacs, I wouldn’t be here.” Yep, that’s right. Black women saved the Oscars!

We could not be more proud of our long overdue winners! Let’s see if The Academy can keep this same energy for decades to come.

For the fashion slay from the red carpet, click here. 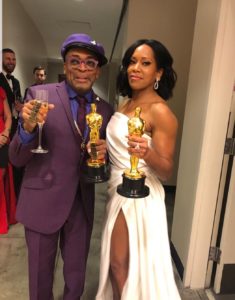 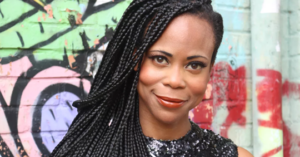 Carrots and Beats: The Leading Ladies of Afrobeats

FKA Twigs on Why She Went Public With Shia LaBeouf...